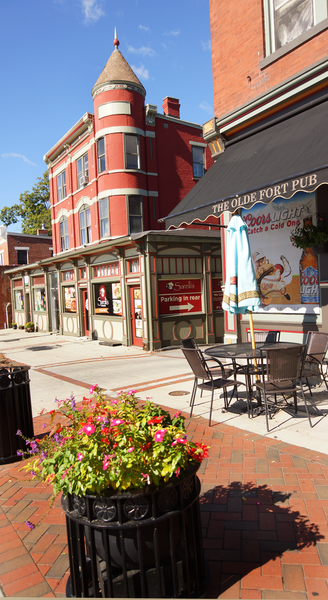 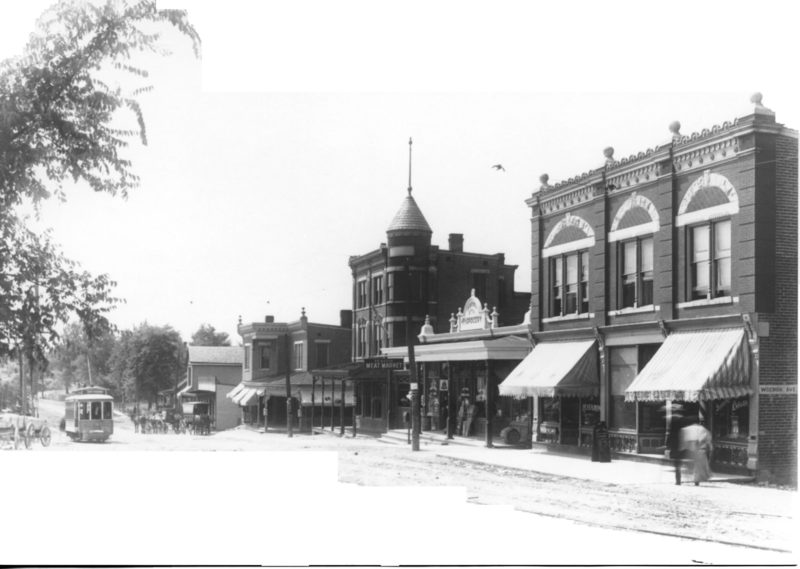 In its past, Fort Thomas, then called the Highlands, was a retreat for city weary people who liked to spend time up in the hills above the Ohio River. Its’ five hotels were popular and well known in the late 1800s and early 1900s. The Highlands was a considered a “resort” destination.

The first hotel in what is now Fort Thomas was the Fort Thomas Hotel, built in 1892 on the Midway across from the Fort. It was built by Mr. J.R. Heckinger, whose son Clifford graduated from Highlands High School in 1898. Heckinger ran a saloon on the first floor of the three-story, corner-towered building and rented out hotel guest rooms on the second and third floors.

As the Fort expanded and housed larger and larger numbers of enlisted men, the Midway across from the Fort became a lively and often rowdy area for off duty soldiers. The Midway strip with its cafes and saloons eventually gained the reputation of being a “wild” place with drunken soldiers and prostitutes walking its boardwalks and renting its overnight accommodations. Led by churches in the town, a cleanup of the Midway took place. A large fire that destroyed several buildings in the Midway was thought to have been set by a religious zealot.

A local sheriff bought the Fort Thomas Hotel, turned its two upper floors into apartments, and replaced its saloon with retail space. One of the first floor tenants was a retail tailor who made and altered military uniforms. The sheriff renamed the building after his wife, and had Nevada, her name, etched into the upper part of the front of the structure.

The Nevada building is now owned by Fort Thomas native and entrepreneur David Hosea. The structure has been renovated from top to bottom. The first floor houses retail space. Three furnished apartments are for rent on the second and third floors.

Second Hotel: Avenel Hotel, owned by Henry Schriver. It was on the land between Manor and Avenel Place. Schriver bought 55 acres from the Cincinnati Jesuits in 1886 after vacationing in the Highlands for seventeen years.

Third Hotel: Bivouac Hotel, built in 1904 on the northeast corner of what is now Bivouac and S. Ft. Thomas Avenue. It is an apartment house today.

Fourth Hotel: The Altamont, the largest hotel in the Highlands, built in 1905 by Major Samuel Bigstaff’s real estate development company. After Bigstaff’s death in 1912, the company changed owners with the hotel’s name being changed to the Altamont Springs Hotel. Owners claimed that mineral springs were found on the property and offered mineral baths for hotel guests. In 1918 the hotel was leased by the U.S. Medical Corps as a WWI Army hospital for soldiers. Today the large home at 20 Crown Point sits on the hotel’s site.

Fifth Hotel: The Shelly Arms, a smaller hotel, was built in 1907 on the south side of the road leading to the Altamont. After the war was over the Shelly Arms and Altamont properties were sold at auction in 1920. Both hotels were demolished. The land the hotels were built on includes Altamont Court, Crown Avenue, and Crown Point.