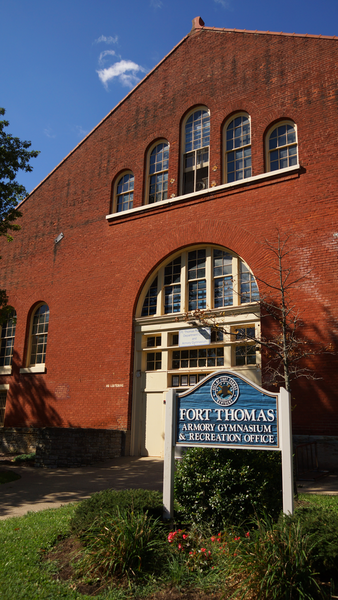 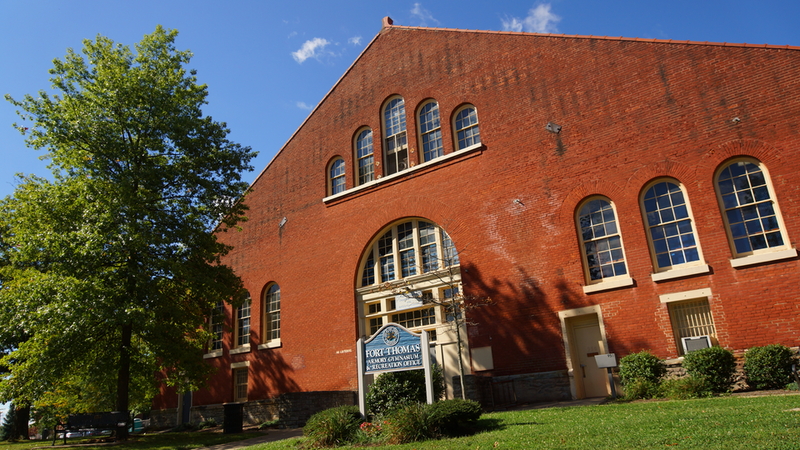 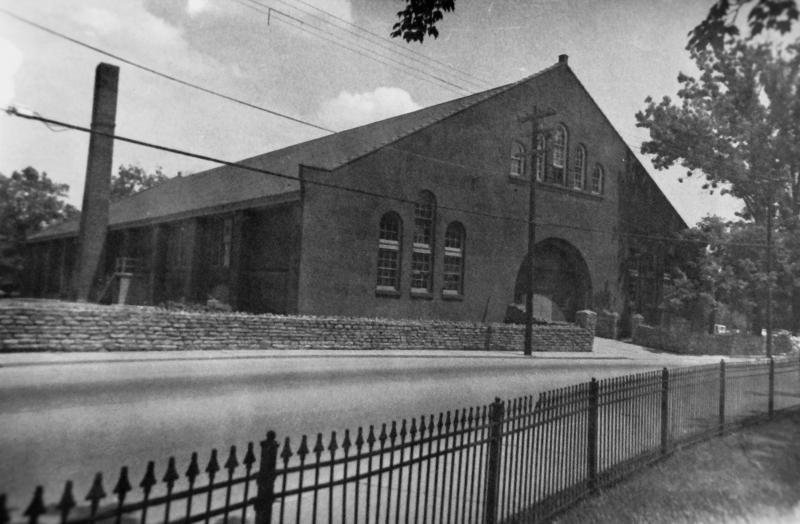 Building 56 stretches between Cochran Avenue and South Fort Thomas Avenue, covering 19,900 square feet. It was constructed in 1896 to be used as a drill hall in inclement weather and as a gym. The cost was $50,235.22. Over the years it has been called the gym or the drill hall, but today it is known as the Armory.

Made from the same red brick used in other military buildings, it is rectangular in shape with a parapet gable facing the public thoroughfare side. The broad arched, central entrance has a very deep, brick voussoir strip, 5 ½ bricks long. The Cochran Avenue side also has a large broad arched entrance. The other two sides are reinforced with square brick buttresses separating the eight bays per side and large blocks of windows on the main floor level. The windows on the entrance sides are in graduated groupings with round tops while lunettes above both doorways extend to the main floor. Ironwork above the entrance resembles a portcullis. The main floor is 100’ x 90’ and has a new floor of hardwood over the original hardwood floor. The ground level floor is covered with the same red tile as in the Mess Hall.

Unique engineering skills for the roof structure were described by Engineer David R. Whitaker as follows:

"The Drill Hall roof structure was constructed by bolting or riveting together a variety of individually constructed and unique sections into a cambered fink truss roof structure. The truss compression members were constructed from Z sections that were bolted together in supporting pairs for lateral rigidity. Tension members were constructed from 3/4” to 1” plate with a large section modulas about the horizontal axis in order to prevent sag. Internal connections between the compression and tension members of the truss are made with a single three (3) inch diameter bolt. Cross bracing of the trusses was a fabricated from steel sections ranging from 1/2” diameter rods with threaded ends to 2” square bars with forged eyes and turnbuckles. With today’s structures being fabricated from light-weight, mass-produced, welded structures, it becomes evident that the Drill Hall was constructed in a time (1896) when man hours and creativity were used where a lack of technology existed.”

The main floor was put to many uses. A reviewing stand above the main floor allowed for observation of military drills and for an orchestra for social dances or “hops” when the military invited civilians from the surrounding community. There was room for three basketball courts. Highlands High School held a graduation ceremony here. Bridge tournaments were held for community guests and when a card party for the benefit of the Red Cross was held here pre-World War II, high school girls were excused from an afternoon class to be servers.

The ground floor contained various kinds of equipment for recreation. There were hand-set bowling alleys, billiard and ping-pong tables. There was a canteen where food and beer were served and a soda fountain. Another area had a shoe-shine stand and laundry.